This is part of a series of posts revolving around user interface design and development, the introduction and links to the other posts can be found here.

The first article in this series discussed the different libraries that exist and the pros and cons of both. In this article I’ll explain the choice of UI library we selected for our current game in development and how we tackled the scalability and aspect ratios problem of UI design and implementation.

Based off the information discussed in the last article, we decided to go with Daikon Forge UI framework (DF-GUI) for our game. For all the good and bad, DF-GUI is a raster based library for Unity. Along with all the previously discussed advantages we felt the source code access was crucial so we could maintain ownership over our codebase. While we would have been able to obtain the source code to some of the vector based libraries the cost was prohibitively expensive. This limits us from some of the nicer vector libraries but as long as this is planned for, it isn’t a major problem.

It’s important to note that DF-GUI is being redesigned from the ground up for version 2.x. If you intend to buy DF-GUI you will want to either wait until 2.x is released, which that is risky unless you’re not on a schedule, or use another library.

The rest of this article will discuss two approaches to solving scaling and aspect ratio issues and will go into our reasons for selecting the one we did. I’ll try to keep things as generic as possible.

Why not use NGUI?

Since this question may pop into a few heads I’ll tackle it straight away. NGUI is a widely used UI library for Unity. It was so widely used that Unity even hired the lead / sole developer to help them create uGUI and NGUI was used as the starting code base (even though apparently it’s changed a lot since then).

Not to go too deeply into this point I feel we should touch on it at least a little. We used NGUI 2.x in a previous project spanning seven months. While it’s a powerful UI library we found we were fighting with it every step of the way. Over the past few months NGUI has been undergoing major redesigns and features for the 3.x branch. We tried an early version of the 3.x branch out and, while the changes were improvements, we felt we were going down the same road as before. Most of the examples are completely out of date and, whilst the NGUI forums are very active, the developer support is usually limited to a single line reply. Needless to say we felt it wasn’t for us and so we decided to look for alternatives and found DF-GUI. In the end, some people are very happy with NGUI so I’d recommend you do your research into it either way.

Why not wait for uGUI?

With Unity’s very own uGUI arriving this summer in Unity 4.6 why not wait for it? One rule of thumb is to never wait for technologies to arrive to develop on. The technology usually will not arrive when it’s meant to and when it does arrive it’ll be, or do, less than you anticipated.

The Problem – Scale and Aspect Ratio

Since we are using a raster based library we accept the problems previously discussed, primarily ensuring scaling and aspect ratios don’t destroy a carefully crafted UI. So the main problem breaks down into two problems.

Game UIs need to scale. Without scaling you’ll end up playing games that seem to have tiny user interfaces since they were designed for smaller resolutions than you’re currently playing at. The problem when scaling a raster based UI system is that you tend to get blurry images. This is a very similar effect to when you run a game at non-native resolution and the game text and UI is slightly blurry. The term I’m using, pixel perfect scaling, is a bit of a misnomer. An image of size 200×200 pixels will only be pixel perfect if it stays at 200×200 pixel in screen space. A nine-sliced sprite, however, can be a little more flexible when it comes to being pixel perfect. This can scale and remain sharp. 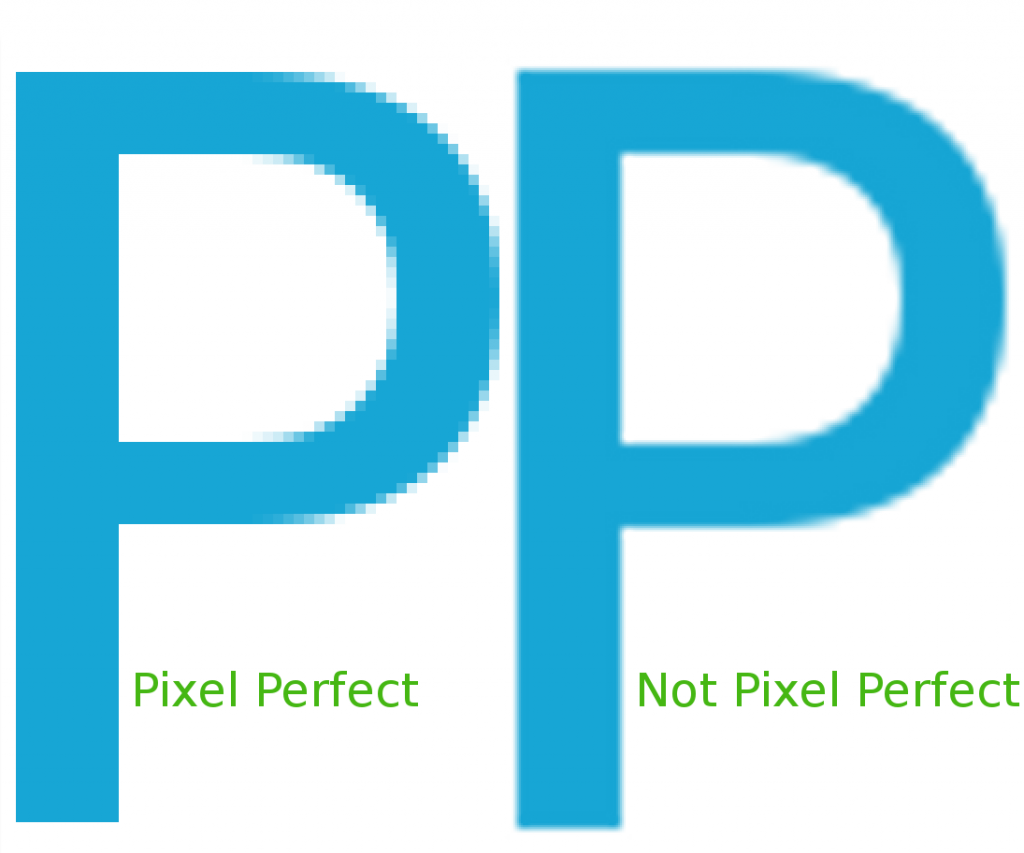 Games UIs need to accommodate the main aspect ratios that exist at the time of creation and the near future. For us at the moment we’re seeing 16:9, 16:10, 4:3 and 5:4 still being used. The difference in horizontal screen space between 16:9 and 4:3 is fairly sizable and this difference can cause some big issues with UI layouts, especially if the UI should maintain a specific user experience.

So to fix these two problems I did a lot of research and came to the conclusion that it’s actually hard to find information on this. There seems to be two approaches, which are to ensure the entire UI can scale and stretch or adopt a safe zone aspect ratio to allow for non-stretching (but this could be extended to support stretching too).

The focus of this approach is to develop the UI so that it stretches to accommodate the different aspect ratios sensibly. The layout is entirely anchor based and would be linked to screen resolution and specific UI elements. The top level UI elements, usually panels, would be anchored to other UI panels and screen edges so when the aspect ratio changes the UI would grow and shrink accordingly. If set up well, changing the size would fill up the blank space that would otherwise appear when changing from a smaller (4:3) to larger aspect ratio (16:9).

Here we hit an important consideration to take into account. Depending on the UI design, the children of those top level panels may not be intended to be stretched. Plain sprites, as opposed to nine-sliced sprites, look bad when stretched width wise only. Think of an image for an icon for instance. On the other hand, any child panels would usually be fine to stretch as these tend to be nine-sliced sprites, but again the children of these panels may not stretch well. A mixture of fixed aspect ratio and stretch support is needed.

For us, DF-GUI’s 1.x anchor system isn’t flexible enough to support this approach very well in my opinion. Trying to construct a stretchable UI lead to a lot of frustrating days trying to ensure the aspect ratios would stretch but also maintain the overall user experience. The new NGUI 3.x anchor system would help a lot in this situation as it’s more flexible but at the time of testing NGUI 3.x there were still some issues that contributed to our choice to go with DF-GUI.

In the end, from our experience, this approach requires more development effort and testing to get right than the safe zone approach below. Even then, a lot of work needs to go into ensuring the UI is well developed for each aspect ratio so there are no large empty spaces within UI panels. This would happen when stretching a UI but not having enough content to actually fill the UI with. In this case minimum and maximum sizes would help but these would have to be computed at runtime as min / max sizes are limiting when factoring in scaling and resolution sizes.

The focus of this approach is to develop the UI for the smallest aspect ratio but taking into account the highest resolution. Anchors are used to edge fit UI.

To help explain the logic, below is an example of the UI running at 1280×720 resolution. The implementation consists of two UI containers. The first is always set to maintain the core 4:3 aspect ratio and is coloured green. The second is set to expand to the full resolution of the game and is coloured blue. 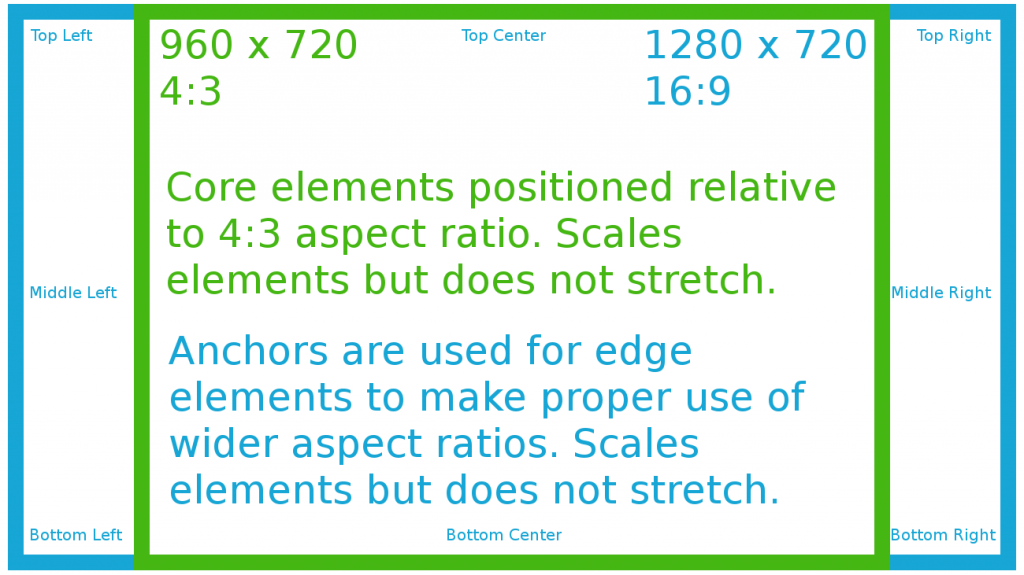 To allow for the maximum use of a game resolution that is not 4:3, the core UI (green) is scaled to the maximum possible resolution whilst still maintaining the 4:3 aspect ratio (this is why in the example the UI core is 960×720). The blue UI container is always at the full resolution of the game.

To use this layout the rules are:

So what about if you want to stretch some UI elements in this layout? You would still be able to with a UI library that supported anchors or you developed your own. In our case, we will probably develop our own unless DF-GUI 2.x introduces a more extended anchor system.

To maintain sharp fonts in the game use of dynamic fonts are a must. Traditional fonts are bitmap based and scale badly causing blurring. You either have lots of font bitmaps of different sizes, which is needless and takes up more space, or you use dynamic fonts. With dynamic fonts, Unity uses the FreeType font rendering engine to create the font texture at runtime. This helps a lot but a dynamic font set to size 12 will still be small when shown on resolutions larger than the design time resolution. The last step to correctly scale the font is having the dynamic font size actually set as:

Since we are using a raster based UI system there will be times when a image will not scale well due to it being too small or too large. In this case we will need to use different sprite atlases and swap them in depending on the current resolution. This isn’t a great solution as it involves a whole new set of images at different resolutions but if the original sprite atlases is of high enough resolution this may not be an issue for some games. Scaling down a high resolution image is always prefered than trying to scale up a low resolution one.

The two approaches I’ve outlined along with the surrounding techniques are almost certainly not the only approaches to scaling and aspect ratios but I found very little information on this area. These are the approaches I discovered and developed upon. Hopefully this helps some of you out there. If you have similar experiences, or have different approaches I’d love to hear your thoughts. Comment, email or grab me on Twitter at @CWolf.