Round 4 starts tomorrow and we’ve been working really hard to bring some awesome features into Mechadroids! 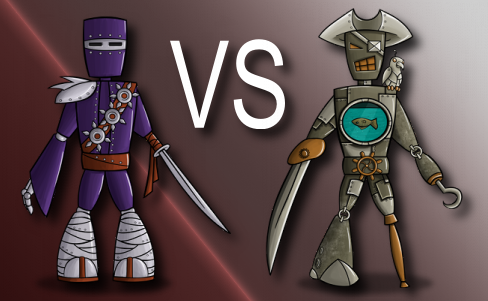 We’re introducing two new Mechadroids to the store! The Ninja, a covert agent of unorthodox warfare, and the Pirate, criminal scum of the world. When you purchase them in the Mechadroids store you’ll get a free rebuild and the full set of Mechadroid parts to remake yourself however you’d like!

You now have a choice of continuing to use the old battle system (now named ‘Passive Battle’) or using the new, more involved, Active Battle system. Using this new system you’ll have much more control over fighting. You’ll fight the battles turn by turn with a choice of four different attacks (normal, power, quick and scatter shot). You’ll be able to feel out your opponent’s weakness while fighting and exploit it ’till they are crying “Please…. No More!”.

Have that certain foe that keeps stealing all your credits? Have trouble beating them yourself? Put them up on the bounty board! You’ll be able to set credit and BP bounties on any player in the game. Any victory against a bountied player will give you some of the bounty and by people winning they will also steal credits off the bountied player so it’s a win/win situation… except for the bountied!

So that’s a taste of the new features coming tomorrow, not to mention the bug fixes and other smaller changes. See you at 8am UTC+1!